I am very excited to announce that I have new partners here at the market: My sister, Sarah Paley Coon and her husband, Chris Coon! Our customers will know Sarah as she has worked behind the scenes at Paley's for a number of years. I will continue to do all the planting and growing greenhouse stock and fresh foods we sell in the market. Sarah and Chris will take over the day-to-day running of the business.

In case you missed it in The Lakeville Journal, below is the article that appeared in their March 7, 2019 edition written by Cynthia Hochswender.

We all look forward to see you soon!
​- Charlie Paley 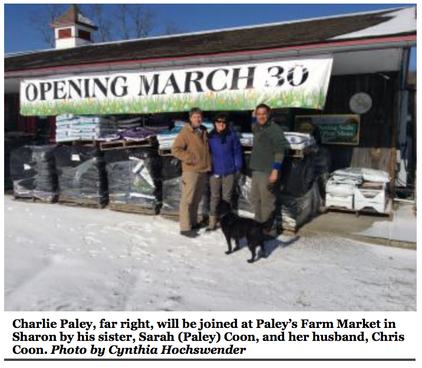 SHARON — It’s late February and seeds need to be ordered and pansies need to be coaxed to life in the greenhouse and Charlie Paley is on vacation. This is possible because Paley has new partners at his eponymous farm market on Route 343 in Sharon: His sister, Sarah (Paley) Coon and her husband, Chris.

This is a relatively new development for Paley’s Farm Market but Paley was confident nonetheless that he could leave things in the hands of his sister and his brother-in-law.

For one thing, Coon grew up on a well-known and respected dairy farm in Amenia. The farm was founded by Chris’ father, Dirck Coon and his uncle Garry Coon in the early 1950s and is now being run by Chris’ brothers and nephews. They milk about 400 cows a day and are one of the farms that provide milk for Hudson Valley Fresh — milk that is sold at Paley’s Farm Market. Farming is, as they say, in his blood.

Better still, Sarah (who is turning 50 this year) has worked with her brother since she was a mere sprout. The eight children of Morris and Emma Paley grew up on what was then a dairy farm, near the curve in the Millerton Road that is now the home of Hotchkiss Library of Sharon Director Gretchen Hachmeister and artist Randy Orzano.

When Charlie was a young teen, he began growing corn on a couple of acres near his home. He enlisted his youngest sister, Sarah, to work as his sales girl, first at a small table in the center of town where the fish truck parks these days, and later at a table in front of what is known as the Good Neighbors building, in front of Sharon’s Bargain Barn.

“There was still a laundromat at the shopping plaza in those days,” Sarah recalled, “and when I would run out of corn I would take the cash box and go over to the laundromat and call Charlie to ask him to bring more.”

It wasn’t until 1982 that Paley purchased the property on Route 343 that is now home to the sprawling empire of greenhouses, farm fields and retail spaces.

“Back then,” Sarah said, “there was nothing there but a three-bay garage. There weren’t any plants.Charlie was really just selling the produce that he was growing.”

The business has expanded exponentially since then. In addition to the plants and food (especially tomatoes, corn, potatoes and lettuce) that are grown on the farm, Paley’s sells an array of fruits, vegetables and prepared foods from vendors and farmers throughout the Tri-state region.

He is known for being extremely meticulous not only about what products he’ll allow into the store but also about how he displays them. There is never any brown lettuce or rotten fruit at Paley’s Farm Market. There are no sad, wilted plants in the greenhouse.

Store manager Renée Wilcox has been a huge help with keeping the store running smoothly and displaying the products beautifully. Sarah Coon has also recruited Heidi Haskell to help run the garden center.

Paley will continue to plant and cultivate the fresh foods sold at the store; and he will continue to ensure that vendors know they can only bring their A Game products to Paley’s Farm Market.

Sarah and Chris will still have plenty to do, running the business, taking care of staff, organizing the accounts. Chris’ particular area of expertise is mechanical repairs; anyone who knows farming knows that the tractors and other equipment are constantly breaking down. It’s an enormous gift to have someone on the premises who knows how to fix things. Chris learned about engines and repairs growing up and spent much of his career working as a mechanic, at two area GM dealers and then at the repair shop that later became the Getty gas station in Millerton, across from CVS.

He is also an aficionado of the antique cars known as Stanley steamers, and other vintage cars including Rolls-Royces. When it comes to cars and engines, Coon has proven himself to be as fastidious and as concerned with aesthetics as his brother-in-law is with the products at the farm market.

But the end result for customers of the popular market will be that things shouldn’t be that different.

In recent years, Paley has felt the stress of running the business on his own, and even took a year off not long ago.

Knowing that his sister and brother-in-law are at his side seems to have already had an effect on his psyche.

“Charlie seems very energized,” his sister said. He’s even talking about new projects at the farm that he hasn’t had time or energy to undertake up to now.

“Our hope is that this will allow the business to continue for a very long time,” Coon said.

Most important, they both stressed: From the customer point of view, nothing will be different at Paley’s Farm Market.

This year, the market is scheduled to open on Saturday, March 30, unless a blizzard or some other epic weather interferes.

​For the month of April, the market is scheduled to be open seven days a week from 9 a.m. to 5 p.m. By May, the hours are expected to expand, to 8 a.m. to 6 p.m. For updates, go to www.paleysmarket.com.